Ice dams: What are ice dams? How can they be avoided? 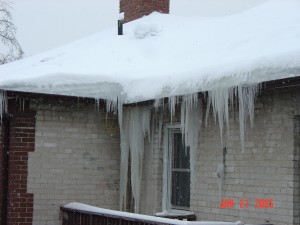 Ice dams are formed by continual thawing and refreezing of melting snow. Large masses of ice develop as snow on the upper part of the roof melts. The water runs under the snow and refreezes at the edge of the roof. Additional snow melts and forms pools against the dam gradually causing water to back up the roof often getting under the shingles and eventually leaking into the house.

How to avoid ice dams: